This is the unofficial story behind the video Mirror Image by Sam Hurwitz.

The covid-19 epidemic is at a high, schools closed, everybody needs to stay home. But now what? That’s what Sam Hurwitz is thinking.
He’s been busy writing songs, working on a new novel, but he wants something more. Can’t go outside and have fun outside. Can’t go to friends and make music with them.
So Sam just walks through the house. His mom asks him if it’s an idea to make u video for his fans. Sam thinks about it and decides to go to the garden. It’s a sunny dry day and lying in the grass of your own house is still allowed. 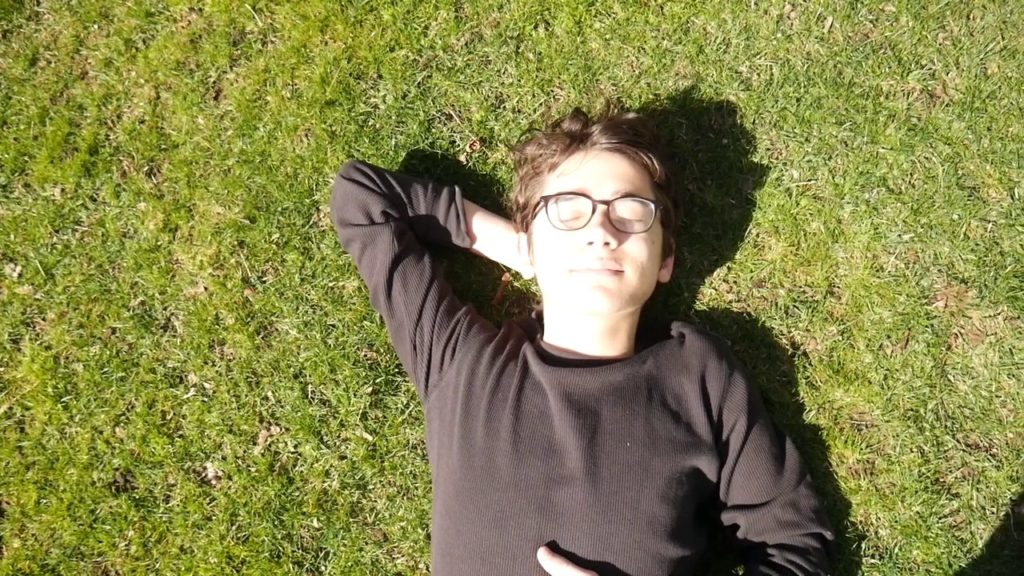 Lying in the sun is sometimes a good idea. Not for getting a tan, but for clearing the mind so ideas can pop up. And that’s what is happening with Sam.
After lying in the sun for some time, Sam walks back in and starts his computer and then starts to write.
“Not going to make a video Sam?” asks mom. “I am, but I need to write it down first” is Sam’s response.

Mom is a bit surprised, but knowing Sam he’ll probably has other ideas about the video than her, and it can only be better than what she thought of.

So there will be several shots in the bedroom, phone will be an alarm to tell it’s time to get up. Shots of trying to write a song, which doesn’t go well. Shots of rain, shops closed. And ending with the situation that lead to the video: lying in the sun. Everything is written down.

Finish. The outline of the video is ready. Time to shoot the video. Mom wants to know who are going to be in the video and for which song it will be. No song, it’s going to be a totally different video from what he’s done so far. And who are going to be in the video? Only Sam. When Sam explains the video, Mom has 2 suggestions: the scenes where Sam is in his underwear, he better wears pants. And the scenes washing himself in the shower (meant as an extreme version of washing his hands) can better be just washing his hands. Sam thinks about it and agrees with his mom.

Now only one thing is needed (besides filming) and that’s a title. Sam needs to think about it. He checks himself in the mirror and then the title pops up in his mind. Mirror Image. That’s a perfect title. A few days later the film is ready and uploaded to YouTube.

This site uses Akismet to reduce spam. Learn how your comment data is processed.